Police Reform In U.S.: Some Progress, A Long Way To Go 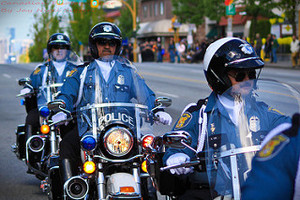 Police Reform In U.S.: Some Progress, A Long Way To Go Policing in the U.S. is showing some signs of improvement, thanks to the attention paid to it by the public and by government officials---and despite the well-publicized misdeeds of a few law enforcement officers in the past year. That's the conclusion of members of President Barack Obama's Task Force on 21st Century Policing, who addressed a conference at George Mason University in... [...]

93-Year-Old Tuskegee Airman Robbed, Then Carjacked After He Gets Lost 93-Year-Old Tuskegee Airman Robbed, Then Carjacked After He Gets Lost A 93-year-old WWII veteran was robbed and carjacked in two separate incidents after getting lost in St. Louis on the way to his daughter's house. The trouble started on Sunday in North St. Louis when the veteran, who was part of the Tuskegee Airmen, stopped his car to call his daughter, according to KTVI. At that point, police said, a man entered the victim's car and took... [...] Group Files Complaint Against Judge Who Sentenced Man To Marry Girlfriend AUSTIN, Texas (AP) — A group that advocates the separation of church and state has filed a complaint about a Texas judge who ordered a man to marry his girlfriend as a condition of probation. The Freedom From Religion Foundation said Friday it filed the complaint against Smith County Court-at-Law Judge Randall Rogers a day earlier with the Texas State Commission on... [...]

How to avoid a nasty and costly divorce war How to avoid a nasty and costly divorce war After attorney Joryn Jenkins' parents divorced when she was seven, she never saw her father again. Experiencing firsthand how divorce can destroy a family forever, Jenkins never wanted other families to go through that. Yet after 35 years of trial work, the attorney was convinced that the grueling divorce court process results in a long and painful experience for the entire family. So a little... [...]