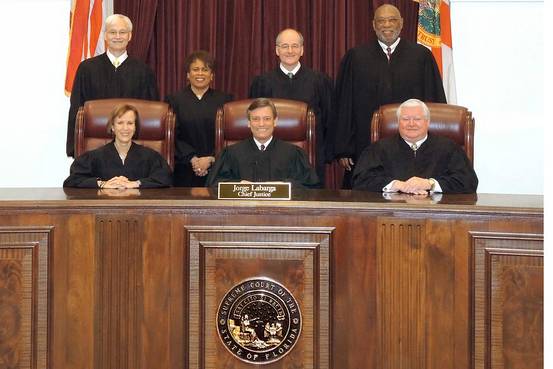 Should judges be allowed to embellish their robes or wear different colors? For Florida’s highest court, the issue is black and white, or make that solid black.

The Florida Supreme Court approved a rule requiring robes worn by judges to be solid black and unadorned. In an opinion handed down Thursday, the court defended the strict dress code:

Depending on the color or pattern of the robe or the type of embellishment worn, some may wonder whether the presiding judge is a “real judge” or whether the judge will take the proceedings seriously. Robe color also could be seen as a reflection of a judge’s mood or attitude that day. Should a defendant facing the death penalty feel trepidation when the presiding judge appears in a red robe or feel more at ease when the robe is green? The possibility that the unique attire of the judge assigned to one’s case could raise these concerns and thereby diminish public trust and confidence in the proceedings is not acceptable.

The public should not have to guess as to the meaning of different colored, patterned, or embellished robes. Promoting uniformity in judicial attire, by requiring all judges to wear unembellished, solid black robes, will no doubt avoid these concerns and promote public trust and confidence. The people of Florida have a right to expect equal justice every day, in every court in this state, and should not have to question whether equal justice is being dispensed based on the color of a judge’s robe.

The Palm Beach Post has more on the robe debate:

While it’s not clear from the decision how many judges might have ditched traditional black for something more colorful, the rule drew some opposition before it was approved.

Maybe most notably, the Conference of District Court of Appeal Judges said in a May filing that it “does not see any need” for the rule.

Some judges questioned the need for the rule, according to the opinion, which said some expressed concern that the court doesn’t “trust judges to dress appropriately or otherwise exercise good judgment.”

Among those who objected to the fashion policing was Broward County Circuit Judge Merrilee Ehrlich.

“I wear a simple white lace collar on my plain black robes to add a touch of femininity to the dignity of the robe,” she wrote in a letter to the court. “The Robes may not be a fashion statement but a modicum of tasteful self-expression that respects the office and the robe must be permitted the safe-keepers of the Constitution. We, too, must be permitted to benefit from its protections, as well.”

“When I was on the bench I had my black robe, a dark blue robe, a gray robe and a burgundy robe. I always wore black during my criminal court assignment for 5 years,” he wrote in another comment letter. “I wore one of the other robes during happier events such as swearing in new lawyers, performing marriages, attending swearing in of other judges, etc. As inappropriate as it may seem, black was not a robe of happiness.”