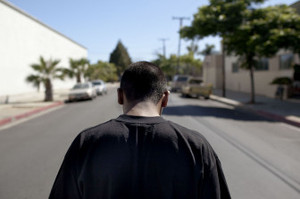 In the summer of 2012, immigration authorities entered the juvenile hall in Orange County, California and took “Alex,” then a 14-year-old, into federal custody. They allowed him to make one phone call to his mother, Marisa.

Immigration and Customs Enforcement (ICE) agents told him he might be sent to a Texas facility, but Alex told Marisa over the phone that he knew little else about where he was headed.

She was in disbelief.

Her son, whose name has been changed to protect his privacy as a minor, had landed in juvenile hall after bringing a pocket knife to school, but she couldn’t understand how Alex ended up in the hands of immigration authorities.

She feared the worst—that Alex would be immediately deported to Mexico, where he was born.

A native of Mexico, Marisa, who is now 36, was 17 when she became pregnant with Alex. But at the time, her relationship with her boyfriend had turned so violent, she almost miscarried. When Alex was nearly three-years-old, she took him and fled her physically abusive partner and crossed illegally into the United States.

She was determined to create a new life in California, but ended up falling into two other abusive relationships.

Alex witnessed his mother being abused, and experienced physical abuse at the hands of his mother’s partners as well. The consequences of his turbulent childhood would emerge early on, but Marisa never imagined when Alex began acting out in school that it would one day lead to his possible deportation.

When ICE agents placed Alex in custody in August 2012, Marisa was still undocumented, without a driver’s license and fearful that any contact with federal immigration authorities would lead to her own deportation.

“I felt awful,” she said in Spanish, pausing to catch her breath as the upsetting memory of that day washed over her. “I knew I wouldn’t be able to go see him in Texas.”

Immediately after the call from Alex, Marisa began to scour the Internet, searching for group homes that house refugee immigrant children and those in deportation proceedings. But she could not find him. She called an ICE facility in Los Angeles—only to learn that Alex was no longer there.

“Nobody would tell me where my son was,” said Marisa, wiping away tears. “It was horrible. I stayed up all night asking myself, ‘Where can he be?’”

[Alex is not alone.]

Hundreds, possibly thousands, of minors in California have been turned over to ICE, dispersed to federally contracted group homes and detention centers across the country, and placed in deportation proceedings that leave the youth in a legal limbo that can last for years.

The practice runs contrary to the rehabilitative objectives of the state’s Welfare and Institutions Code, which governs the juvenile justice system and seeks to preserve a minor’s family ties and offer care that’s in a juvenile’s best interest, say immigration attorneys and legal scholars.

The California legislature has now passed a bill that seeks to halt the disclosure of confidential information about undocumented juveniles to federal immigration authorities without a court order.

For years, legal scholars and immigrant youth advocates have clashed with probation departments that notify immigration authorities when a juvenile suspected of being undocumented is in custody. They say the practice violates the state’s current law protecting juvenile confidentiality as well as the constitutional rights of vulnerable youth in the juvenile justice system, including minors with mental health and developmental issues.

Probation officials from Orange County to Santa Barbara to San Mateo contend the referrals are legally sound and that federal law protects their right to communicate with immigration officials, leaving the two sides at an impasse.

While some probation agencies have referred youth to federal immigration authorities for decades, the practice drew the attention of legal scholars and immigration attorneys as the referral numbers statewide trended upward starting around 2008. The referral trend was particularly evident in Orange County, where data shows the probation department enforced the practice aggressively from 2008 to 2012.

Some probation agencies, including Orange County, altered their procedures over the last three years and limited the circumstances under which youth could be referred to ICE, which investigates immigration law violations.

But youth advocates and immigration attorneys representing these minors say the changes have not gone far enough: Existing procedures still give probation officials the discretion to refer minors and release their confidential information to ICE, and the agencies have continued to do so albeit in significantly smaller numbers.

“When these laws were passed they were clear as to who would get access,” said San Francisco attorney Angie Junck, one of the state’s leading experts on the issue of juveniles turned over to immigration authorities. “There was nothing contemplating that any federal agency would get that information.

“We believe the law says what we’re already saying, that it is illegal for [probation departments] to report minors.”

Legal scholars from the Immigrant Rights Clinic at the University of California Irvine School of Law, who scrutinized the Orange County Probation Department’s past and current procedures, concluded that the referrals violate California’s juvenile confidentiality law, and trigger a series of actions that violate due process and other constitutional rights of these juveniles.

The consequences of the ICE referrals are far-reaching.

[They] have produced a generation of undocumented juveniles who form part of an invisible segment of incarcerated youth, primarily American-raised boys, but girls as well. In Orange County, where nearly 80 percent of minors in juvenile hall are Latino, a majority of the juveniles referred to ICE are Latino.

Torn from their families at a crucial time in their lives, the youth taken into federal custody are shuffled across the country from federal facilities to detention centers to group homes while the government determines what to do with them.

They are held for months at a time in facilities that are overseen and funded by the Office of Refugee Resettlement (ORR)— the federal agency responsible for the care and housing of unaccompanied minors who are detained by ICE.

Federal resources and taxpayer dollars are spent housing, schooling and treating the youth in these facilities.

However, the costs don’t reflect the price paid by the juveniles, most of whom the agency reunites with their families to await deportation proceedings after running the ICE and ORR gauntlet.

Youth advocates, immigration attorneys and legal scholars have cited the following issues with the procedures followed by the Orange County Probation Department and the actions triggered as a result:

• When notifying ICE, OC Probation turns over a case file document with the juvenile’s personal information. State law does not grant ICE access to these confidential files, so the federal agency must receive a juvenile court order.

• Orange County’s probation department allows ICE agents to enter juvenile hall to interrogate minors who are suspected of being undocumented without a parent or attorney present.

• Juveniles interrogated by ICE do not receive a notice, informing the minor of the right to legal counsel, use of a telephone to contact family, and a trial before a judge, until after the interrogation has taken place.

• Department of Homeland Security attorneys use the interrogation statement as factual evidence against the minor in immigration removal proceedings.

• Minors placed in removal proceedings are sent to live in facilities across the state and nation, disrupting probation services and behavioral treatment, and separating the youth from their families, schools and communities.

“The whole point of keeping things confidential and treating [youth] differently is the idea that kids can change and they should be given a chance to [change],” said Kristen Jackson, a senior staff attorney who specializes in children’s immigration issues at Public Counsel, a Los Angeles-based pro bono law firm.

Part of the reason the state’s juvenile confidentiality provisions exist is that minors are at a developmental stage where their judgment may not be fully formed, Jackson said.

“When you take a system and treat these youth as miniature adults— and you also in some cases see deportation as an additional punishment for them—it really runs counter to the goals and the aims of the juvenile justice system,” said Jackson, who has represented Orange County juveniles turned over to immigration authorities.

In the aftermath of the tough-on-crime movement that began more than two decades ago, a more punitive juvenile justice model emerged along with zero-tolerance policies in schools. The result is that behavior that once would have landed students in detention hall, today delivers them to juvenile hall.

But as undocumented juveniles have discovered, the consequences of misbehaving and getting entangled in the juvenile justice system are harsher when county probation officials report them to ICE.

Cut off from their juvenile court-ordered rehabilitation programs, many return traumatized by the separation from their family and friends, and often feel a sense of displacement in their schools and neighborhoods, advocates say.

They are part of a lost generation of boys caught in a labyrinth of bureaucratic and legal uncertainty, living in limbo as they wait to return to their families or get deported.

An investigation by Voice of OC, as well as independent studies and research done by legal scholars across California, show that the juvenile justice system created to rehabilitate these youth and provide help for behavioral issues had instead systematically handed these minors over to federal immigration authorities.

The Case of ‘Alex’

Getting her son Alex home safely was her first priority, but Marisa was also determined to find answers to the question that had baffled her from the beginning: Why had the Orange County Probation Department notified federal immigration authorities that her son was in the Orange County’s juvenile hall?

Immigration attorneys, legal scholars and youth advocates across the state and nation have been asking the same question for years.

“I think the spirit of that law, in addition to the actual provisions in the law, make it clear that disclosing this information in a completely different system that could result in completely harsh circumstances for kids who don’t deserve it, is a violation of the whole purpose of confidentiality in the juvenile justice system,” said San Francisco attorney Shannan Wilber.“

We believe this is an issue nationwide,” added Abraham Medina, youth engagement coordinator for Santa Ana Boys and Men of Color. “So if we can set a precedent in Orange County, hopefully we can also push for a national change in procedure and policy so that minors don’t have to fear being deported and parents don’t have to go through this unnecessary process.”

Some probation officials have told San Francisco attorney Angie Junck they weren’t aware that the youth they referred to ICE are often returned to their families and communities to await their fate.

Other probation agencies, such as Santa Clara County, have opted to implement starkly different practices by not referring any juveniles to ICE, she said, because it’s in the best interest of the youth.

“They just know that good juvenile justice practice means that you keep kids in the least restrictive environment, you keep them with their family and you focus on rehabilitation,” said Junck.

“Everything about reporting to ICE and trying to deport kids contravenes that.”