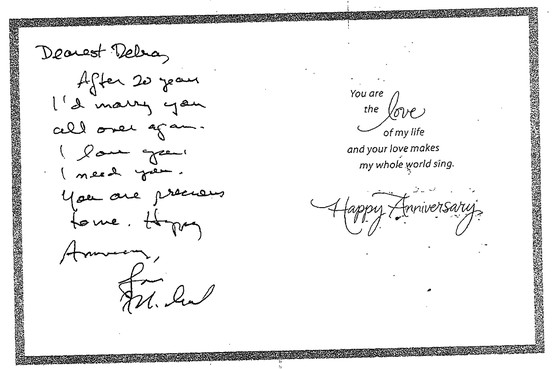 Michael and Debra Mandelbaum lived as husband and wife for about 20 years. They had a Jewish wedding ceremony. They had three children, filed tax returns jointly, purchased houses and shared anniversary cards, court records show.

Now, Mr. Mandelbaum has taken an unusual position in divorce proceedings brought by his wife. He said in New Jersey Superior Court documents that, according to the letter of the law, they were never technically married.

New Jersey statutes require couples to obtain a marriage license before their ceremony. But the Mandelbaums’ Dec. 5, 1993, ceremony, in the office of a rabbi with Ms. Mandelbaum wearing a gown from Kleinfeld Bridal, came 16 days before their license was granted, according to court filings.

“The parties were never fully married and so the court must dismiss her [divorce] complaint,” Mr. Mandelbaum’s lawyers said in the filings.

Mr. Mandelbaum, 47, handles the legal affairs of his family, who hold a stake in the Minnesota Vikings and part-ownership of Vornado Realty Trust VNO -0.53%, one of the largest owners of retail and office space in the U.S., said Alan Marcus, Mr. Mandelbaum’s spokesman.

Mr. Marcus said “Mr. Mandelbaum acknowledges” his relationship with Ms. Mandelbaum “and is committed to resolving the dispute in a fair and appropriate manner consistent with law and in the best interests of his children.”

Ms. Mandelbaum and her lawyers didn’t return messages for comment.

In 2012, Mr. Mandelbaum’s income was more than $6.6 million, according to Internal Revenue Service filings in the court documents.

Ms. Mandelbaum, 52, said in court filings that Mr. Mandelbaum’s legal position is a way to “escape having to pay me an equitable distribution which could total hundreds of millions of dollars.”

Kevin B. Kelly, a professor of law at Seton Hall University who isn’t affiliated with the case, said Mr. Mandelbaum’s tactic has been used with some success.

But while the law was clear on what constitutes a marriage, he said, the court will also take into account the “good faith of the parties.”

“A lot of it comes down to common sense,” said Mr. Kelly. “The real key in those cases is the motivation.”

The parties’ next court date is in early October.

Ms. Mandelbaum’s June 2014 filing is filled with documents that she said are examples of the couple’s married life.

Ms. Mandelbaum said she met Mr. Mandelbaum, then a Harvard law student, in 1987 on a flight to New Jersey. At his request, she converted to Judaism in 1992 and left her career as a teacher so they could marry.

She said she didn’t know about his family’s fortune—Mr. Mandelbaum’s father was included on the Forbes list of the richest 400 Americans—until around their wedding.

After the ceremony, “we purchased real estate jointly, shared joint bank accounts and credit cards, filed joint tax returns, and identified ourselves as husband and wife on countless other legal, business and social documents,” Ms. Mandelbaum said in the filing.

On one wedding anniversary card, Mr. Mandelbaum wrote, “After 20 years I’d marry you all over again.”

He gave her a Mother’s Day card that included the pre-written message, “For My Wife,” court records show.

Another exhibit, Ms. Mandelbaum said, is Mr. Mandelbaum’s grandparents writing they would be “happy to attend” and were “looking forward to” the couple’s wedding ceremony, which was ultimately delayed until December.

Mr. Mandelbaum, in court filings, said Ms. Mandelbaum was aware of the issue that their ceremony predated their license and that she refused to fix it. Ms. Mandelbaum denies that.