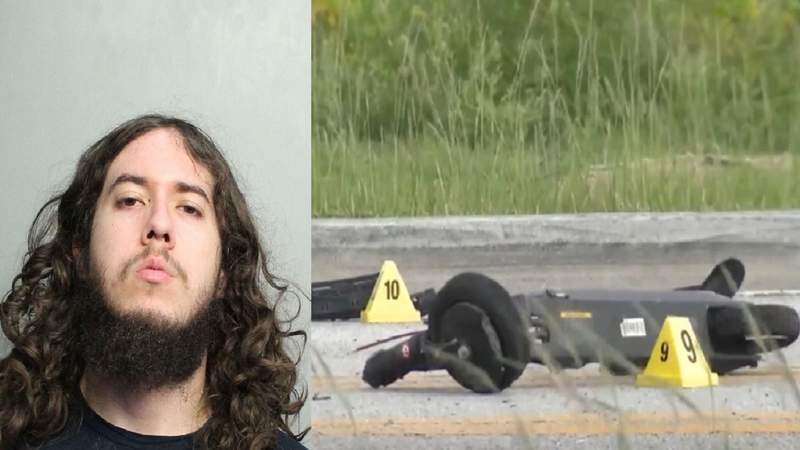 MIAMI-DADE COUNTY, Fla. – A 19-year-old man was arrested Thursday after he fatally struck another man who was riding a standing electric scooter and then fled the scene, authorities said.

Marcus Julian Pradere, of Miami, faces charges of leaving the scene of a crash resulting in a death and tampering with physical evidence.

According to his arrest report, Pradere struck the victim with his red Honda Accord just before 5:30 a.m. Wednesday in the area of Old Dixie Highway and Southwest 296th Street.

According to authorities, Pradere was heading north on Old Dixie Highway when he struck the victim as the victim was crossing Southwest 296th Street.

According to the arrest report, the investigation led officers to Pradere’s home and his father answered the door, telling the officers, “I know exactly why you are here, come in…my son was very scared.”

Police said Pradere’s father gave them consent to search the residence and they found the Accord, which had evidence that was consistent with it being involved in the hit-and-run. Police said the car also had a gray cover on top of it in an effort to conceal the damages.

According to his arrest report, Pradere confessed to his involvement in the crash and was taken to the Turner Guilford Knight Correctional Center.

If you, a friend or a family member find themselves in a situation such as this, please call the Law Office of Scott A. Ferris, P.A. at 305 670-3330 right away. Scott A. Ferris, Esq. is a licensed attorney who has been practicing law for 34 years. He is available whenever you need him to defend your rights. Please learn about our firm at www.FerrisLawFirm.com.