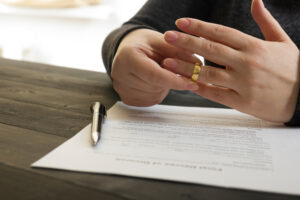 US divorce rate hits 40-year low. Here’s what those numbers won’t tell you

As of this month, the national divorce rate is the lowest it’s been in almost 40 years, according to a report released by the National Center for Family & Marriage Research at Bowling Green University. The marriage rate, on the other hand, increased slightly from 2014 to 2015 (from 31.9 to 32.2 new marriages per 1,000 unmarried women 15 or older).

But before you begin cheering the reversal of family breakdown in America, it’s necessary to consider the many factors at play when it comes to measuring something as unique and as complex as marriage.

According to the National Center for Family & Marriage Research, the marriage rate has been stable (between 30 and 35 new marriages per 1,000 unmarried women 15 or older) since 2010. Before 2010, marriage had been steadily declining since 1970 — the year no-fault divorce was first signed into law. So that’s the good news. The bad news, however, is that marriage is still at a 45-year low. In 1970, the rate was 76.5 marriages per 1,000 unmarried women 15 or older. So the rate hasn’t “dipped up” again — it’s just flat-lined.

So what does a study like this actually offer us? To help answer this question, Conservative Review reached out to the Love & Fidelity Network, a pro-family organization based in Princeton, N.J., that supplies college students with “resources, support, and arguments” to defend conservative family values and sexual integrity on campus.

“Marriage is so good for individuals and for society at large (and even for the economy!) that seeing increase in marriage rates and decrease in divorce rates certainly looks like something worth celebrating. As with all data, however, it’s worth a closer look to understand more fully what is driving those surface-level trends.”

La Ruffa mentioned the modern rise in cohabitation among young adults, and how this could be contributing to studies like the National Center for Family & Marriage Research report.

“There are a few ways cohabitation could be a factor here,” she explained. “One, we may be seeing fewer ‘starter marriages’ than in previous decades. Couples that cohabit and break up in their early twenties without ever walking down the aisle don’t get factored into the divorce rate.”

In other words, a shrinking divorce rate is not so much a sign that Americans are embracing marriage as it is a sign that they are avoiding divorce.

Millennials … tend to have strong conservative moral [stances] on at least one sexual revolution issue: divorce. They don’t buy into the 1970s idea that divorce can be a vehicle of self-actualization and the kids will be alright. They’ve lived through it, and they know better. But their avoidance of divorce can show up, sometimes, in a commitment to marital fidelity in their own lives. But sometimes, it can show up in a refusal to marry at all.

Moore compared millennials’ abandonment of marriage to the generation’s tendency to disengage from politics. Rather than participating in a civic good, they’ve opted to avoid it altogether (as elections and politics also carry the potential for corruption).

But according to LFN’s La Ruffa, cohabitation is not a viable alternative to divorce:

Dr. Scott Stanley’s [research professor and co-director of the Center for Marital and Family Studies at the University of Denver] work explaining the ‘sliding versus deciding’ phenomenon offers a compelling explanation as to why this may be: couples who begin living together create ties that make breaking up very complicated (e.g. a joint mortgage, a pet, even children) so they “slide” into marriage without having made a conscious, pro-active decision that this is the person they want to spend the rest of the life with at the outset.

To complicate things further, traditional factors used to gauge the future success of a marriage, such as socio-economic status, aren’t as reliable as once believed. For example, conventional wisdom tells us that the wealthy and well-educated are the groups most likely to marry and stay married. But according to the recent report, the region of Washington, D.C. — one of the wealthiest and most educated areas in the country — has had the highest divorce rate for the past two years (29.9 per 1,000 married women).

Given all of this, how should young people of dating or marriage age view reports like this latest one on divorce? Are there more important, essential, or enduring things to consider beyond statistical probability and trends? Yes, says Caitlin La Ruffa:

Factors that have the greatest influence on marital stability and quality (outside of socio-economic status, which is worth a separate conversation) are one’s family of origin, one’s religiosity, and even age of marriage. Amazingly enough, some research now suggests that the mid-to-late twenties are the ideal age to get married in terms marital stability and especially marital quality. (Those who get married later report a lower marital quality than the twenty-something marriages). This runs counter to conventional wisdom that tells us to delay marriage whenever possible.

The bottom line is this: Studies like these aren’t as big of a deal as we often make them. No body of data is capable of comprehensively measuring the moral health of society, and no algorithm can predict the course that any individual relationship will take.

It is still important to be aware of cultural and historical trends to help guide our decisions, rather than blindly fall prey to the status quo. What we shouldn’t do, however, is look to trends as an example and then conform our habits and decisions to match the data. Data should inform us, not shape us.

The quality of a marriage depends on the content, which is determined by two individuals — each possessing his or her own free will. It is the couple that ultimately decides how the relationship will turn out, not mere probability or chance. That is very good news, indeed.

How the Law Office of Scott A. Ferris, P.A. Can Help

If you, a friend or a family member find themselves in a situation such as this, please call the Law Office of Scott A. Ferris, P.A. at 305 670-3330 right away. Scott A. Ferris, Esq. is a licensed family law attorney who has been practicing law since 1987. He is available whenever you need him to defend your rights. Please learn about our firm at www.FerrisLawFirm.com.