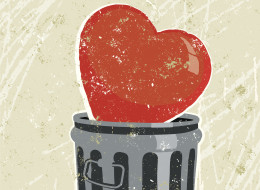 “Don’t get divorced if you think you’re just going to go out and find the right person to marry,” my mother said to me on a cold, white Michigan afternoon many years ago. I was sitting in my tiny master bathroom, the door shut as I whispered into the phone and my two toddlers played downstairs while the baby slept.

“You may never find Mr. Right,” my mother said. “Only get divorced if you would rather be alone the rest of your life than be with this person.”

At the moment that she said it, I felt the words were harsh and cruel.

But it didn’t take long for me to see the truth in my mother’s words — and be grateful for them. It took six more months before I got to the point of truly preferring a life spent alone than one shared with my husband at the time, and I took the courageous step to file for divorce.

In 2006, I wrote an article about how Orthodox sex was so hot. Despite the fact that two years later my Orthodox marriage crashed and burned, I don’t regret writing that piece. In fact, I’m pretty proud of it for more reasons than you might think. (Even though the marriage ended, we did have hot sex at times. There is always good amid the bad, and we had eight years with pockets of pretty damn good.)

Once a person divorces, it would be easy to say, “I never should have married that person in the first place.”

We always want to avoid the hurt, anger and sense of loss. But I’m really glad I married my ex because I wouldn’t be the person I am today if I hadn’t.

Sometimes, it’s a good thing to marry Mr. Wrong — because it leads you to Ms. Right, a.k.a. yourself.

Over the eight years of my first marriage, I spent many late, lonely nights on the phone with a grad school friend who lived in Wyoming, turning over the details of my unhappy marriage. (His soothing voice calmed my nerves and made me feel less alone, like I was worth loving.)

During that marriage, I awoke from infrequent dreams about my college boyfriend, wondering where he was and if I would have been happier with him. (I wouldn’t have.)

Marrying the wrong guy gave me six great life lessons that forever changed me, and for that I will be eternally grateful to my ex-husband:

1. He’s the reason I have the best three children in the world.

I know every mother says that, but truly I feel lucky to be their mother. It is said that the child chooses the parents and if that’s true, I am really glad my three chose me. They are smart, sweet, outspoken, unique and full of love. I don’t know what my life would be like without them.

Being their mother makes me more patient, more kind, more caring, and it gives my life focus and meaning beyond work. I often ask myself what the purpose of our lives is, and when I look at my three children, I begin to understand. We are here on this planet to leave a legacy, to make the world a better place, to contribute to community. We are not here for ourselves. And being a mother has broadened my sense of purpose and motivation as well as expanded my ability to love.

2. He helped me stand on my two feet.

Before I married my ex, I was needy and insecure, seeking love and acceptance anywhere I could find it. This led me to date a lot of guys in high school and college, miss opportunities to broaden my own horizons, travel and try new things while I focused agonizingly on relationships and clung to people I thought might complete me. It wasn’t a pretty picture.

He made me realize that being with another person can’t erase the loneliness inside. Only I could do that. I had to bravely look at myself in the mirror and face the fact that even legally bound to another person, I was inherently alone — and then slowly eliminate my fear of that. I like myself now, and I like my time alone. I am not afraid of it. Secondly, being married to my ex and having three kids in four years forced me to stand up and take charge. He wasn’t around a lot, so I had to run the show. I couldn’t cling; he wasn’t there to let me. I had to shake off the malaise of the person I used to be and evolve into the person I always wanted to be.

3. He allowed me to confront what I truly wanted out of life.

When I decided to divorce, the economy was tanking and my kids were not quite 2, 4 and 6. Since my ex is a musician, I needed a secure income stream to support my kiddos. So I created a business, which has grown and thrived more than I ever could have hoped. If I hadn’t spread my wings and asked myself what I truly wanted out of life, I wouldn’t own a successful public relations company, be the author of eight books and speak nationally about the power of story and relationships.

You change one thing in your life (like leaving a marriage) and you realize anything is possible if you just take the first step. So you change a lot more and blossom.

4. He taught me that some relationships are just not meant to be.

Marrying the wrong guy taught me that no matter how hard you try (and we did, trust me), some relationships are just not meant to be. I gained clarity and wisdom through my former marriage, so that when I met my current husband, I had open eyes.

I looked for his flaws and oddities, and asked myself if I could live with them. I knew before I married him that I didn’t like the way he fought and so we knew we had to work together to communicate. I know that I don’t like that about him, but I like enough — and I knew all this before I walked into a commitment so there are no surprises. That makes this relationship easier. And on that note…

5. He taught me that what looks like failure can actually be success.

There is a belief that relationships exist for “a reason, a season or a lifetime” — as long as they are needed. My ex and I, we had a season. And that’s OK.

6. He forced me to face myself.

No marriage ends because of one person — and in our situation it definitely took two to tango. My ex and I were equally responsible for the good moments in our marriage and the bad. Even today, when we get into each other’s faces over something to do with co-parenting, it’s not just him. I know that.

By marrying the wrong guy, I had to face up to my own flaws and unattractive tendencies. They exist, and when my ex pointed them out, as much as I didn’t want to hear it, I knew he was right. When a relationship goes wrong, you have to ask yourself what the common denominator is in every relationship you’ve had that hasn’t worked out. By the way, it’s you.

This article originally appeared on YourTango.