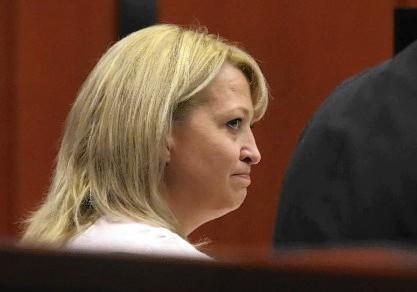 A judge today sentenced the Oviedo woman who says she killed her estranged husband while he was raping her to 40 years in prison.

Circuit Judge Kenneth Lester Jr. could have sentenced Anita Smithey to as little as 25 years or as much as life.

Instead, he chose something in between for the 46-year-old data analyst.

Smithey shot Robert Cline III five years ago in her bed. She told authorities he was an abusive man who was raping her, but prosecutors convinced a Seminole County jury in November that there was no rape, that Smithey and Cline were having consensual sex when she got angry.

She shot him twice, Assistant State Attorney Kelly Jo Hines pointed out again today. The first shot wasn’t lethal but was from near point blank range, she said.

“He had absolutely no way of escaping the path of any bullet,” Hines said.

Then instead of helping him, Hines said, Smithey shot him again, and in order to make herself appear the victim, stabbed herself in the side with a knife.

Jurors deliberated 2 1/2 hours on Nov. 20 before finding her guilty. Moments after the verdict was read Smithey collapsed in court and began wailing.

Today, she remained composed. She was dressed in a blue Seminole County Jail jumpsuit, handcuffs and chains.

Just before announcing his decision, the judge asked her what she had to say.

Defense attorney Whitney Boan answered on her behalf: There would be no statement. Defense attorneys plan to appeal her conviction later today, Boan said.

A few moments earlier Boan asked for the shortest prison term possible: 25 years. At that, Boan pointed out, Smithey would be locked up until age 71.

Smithey will remain in the Seminole County Jail until at least March 9, when she will return to court and ask to be freed on bond while appealing.

That’s something the state will oppose, Hines said.

It was clear when the day started that Smithey, who has no prior criminal record, would get at least 25 years, something required under state law.

Hines had asked for a life sentence.

Witnesses for both sides tried to convince the judge to rule in their favor. State witnesses, including the victim’s two children, called him a hero and a loving single father who baked cupcakes and fixed his daughter’s hair.

Defense witnesses described Smithey as a generous person who loved her children, made food for the sick and did laundry for a pregnant friend who could not get out of bed.

The night of the homicide, Smithey told police that she shot Cline after he pulled a knife, slashed her neck and hit her in the face, chipping a tooth.

She also said he stabbed her in the side but later told police an ever-changing version of events, including that she did that to herself.

At her trial, Hines told the six-member jury that Smithey’s injuries were not from an attack, that the couple sometimes played “date rape” and sometimes used a knife. That’s what happened the night of the homicide, Hines said.

The couple had been separated for three months, but Smithey told police they routinely got together for sex and had the night of the homicide, May 3, 2010.

She agreed to the sex reluctantly, she told police. She had moved out because he was physically abusive, she said.

The courtroom was full today, the north half with Cline’s family members, the south side with Smithey’s.

The defendant’s father, brother and 18-year-old son testified on her behalf.

“She’s not this monster, this terrible, uncaring, savage person that other are trying to make her out to be,” said her son, Andrew Smithey, a student at the University of Florida.

Said her brother Audie Andry, “She is, lifelong, a good person. Regardless of where she is, she will continue to try to help people.”