Sent Home From Middle School After Reporting A Rape 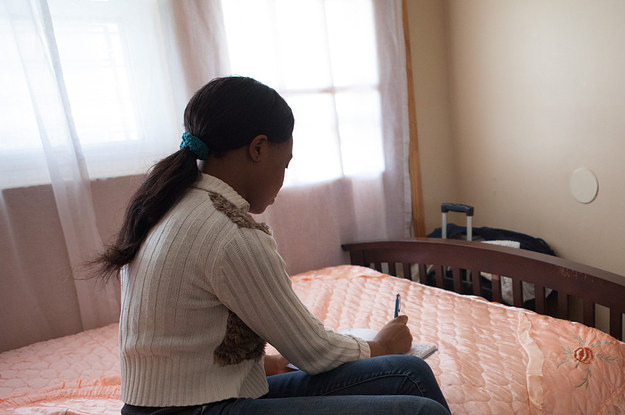 Sent Home From Middle School After Reporting A Rape

This story contains a description of sexual assault.
Over spring break in April 2015, 13-year-old G. stopped eating and sleeping. She started having panic attacks and complained of excruciating pain. When G.’s friends and mother asked what was wrong, G. refused to tell them. Then, later that month, the video started to spread.
A boy in G.’s eighth-grade class at Spring Creek Community School, a public middle school in Brooklyn, had filmed himself penetrating G.’s mouth and anus. G. said she had been raped. The boy claimed the sex was consensual. To G.’s horror, the video he secretly filmed of her was shared all over Brooklyn.
“It was the most awful thing,” said G., who is identified by her middle initial to protect her privacy. “It was bad enough that everyone knew what happened. But knowing that they had seen the video was that much worse.”
G. insisted she didn’t want to have sex with her classmate. But other kids told G. it was her fault for not putting up enough of a fight. “They said I allowed it to happen to me,” G. said. “But I had no idea what I was supposed to do.”
No school principal wants to deal with such a catastrophe. But under the federal gender equity law Title IX, schools that receive federal funding have to thoroughly investigate all claims of sexual harassment and assault. Above all, schools must ensure that students aren’t denied their right to an education on the basis of sex.
When G. reported her rape, Spring Creek’s response denied her that very right, according to a federal complaint G.’s attorney filed against the New York City Department of Education in November 2015.
The first school administrator G. confided in didn’t report the incident, the complaint states, while another asked her why she hadn’t fought the boy off. Then, the principal sent G. home — indefinitely — while the school tried to get a handle on the situation.
Administrators didn’t refer G. to counseling or legal services. They didn’t forward her homework. They didn’t follow up at all. After a four-day investigation, the principal told G.’s mother that she had arranged a “safety transfer” for G. to another school, as there was nothing more Spring Creek could do.
In fact, there was no transfer in place, according to the complaint. G.’s mother had to navigate the complicated transfer process herself. It took nearly a month before G. was able to enroll at another school — and that was only with the help of attorney Carrie Goldberg, a lawyer who specializes in sexual consent litigation.
A spokesperson for the NYC Department of Education said there were “inaccuracies” in the Title IX complaint, which is currently being investigated by the federal government’s Office for Civil Rights. She would not comment further on the record.
In an interview at home, G. said she’s still recovering from the incident — and she’s still confused about why she was punished for telling the truth.
“Everyone was blaming things on me,” G. said. “It was so much pressure. I couldn’t take it. At times I felt like giving up on my life.”

College students have filed hundreds of Title IX complaints in recent years. The anti–campus sexual assault movement has gone so mainstream that, in February, 50 survivors joined Lady Gaga onstage at the Oscars to perform her theme song to the campus rape documentary The Hunting Ground.
Kids in elementary, middle, and high school are protected by Title IX too. But they receive a fraction of that attention — even though they face much greater barriers to reporting and are more vulnerable than college students.
It’s not for lack of guidance. In 1999, the Supreme Court upheld that school districts can be held liable for damages in student sexual harassment cases under Title IX. The Department of Education periodically sends letters to schools about their responsibilities under the statute and has made key resolution agreements with elementary and secondary school districts all over the country.
Under those guidelines, schools have to thoroughly investigate all claims of sexual harassment and assault — even if the police are already investigating, and even if students don’t come forward themselves. Schools are supposed to ensure that the campus is not a “hostile” sexual environment, inform students and their families about Title IX grievance procedures (such as who to file a complaint with, or what to do if you’re retaliated against for reporting), and designate a special Title IX coordinator to ensure they’re following the rules.