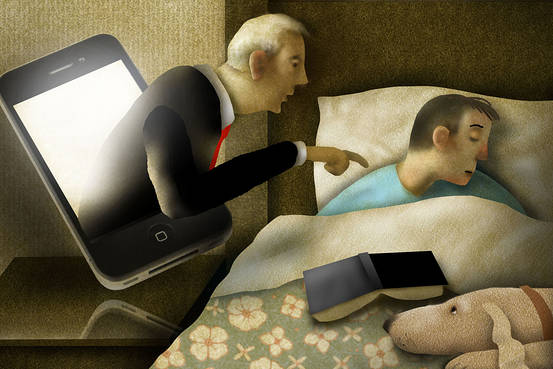 A trial wrapping up in Chicago pitting police officers against the city is one of the most high-profile cases to examine the rights of employees to be compensated for time they spend after hours glued to their phones dealing with work.

Police officers who sued the city five years ago allege that their supervisors expected them to respond to e-mails, voicemails and text-message work orders “throughout the night and into the early morning hours while off duty” with an implicit understanding that they wouldn’t be compensated with overtime pay.

As The Wall Street Journal reported earlier, the dispute is among a handful of lawsuits unfolding in courts dealing with an area of law still in flux: whether companies can expect employees to work unpaid and off hours via iPhones, BlackBerrys or other digital devices.

The police plaintiffs argued that the work qualified for “time-and-a-half” overtime wages and that the city violated their rights under federal labor laws by not giving them extra compensation.

Last year, the judge in the Chicago case allowed some Chicago police officers to pursue their claims as a group. And on Monday, the trial entered closing arguments, according to the Chicago Tribune, which has more background on the case:

For the Chicago cops suing the city, the matter of getting paid overtime for BlackBerry use is a matter of both culture and policy. The case, before Magistrate Judge Sidney Schenkier, was originally brought in May 2010 by Sgt. Jeffrey Allen and grew to include about 50 members of the department.

At the time, it seems the department had no written policy on off-duty BlackBerry use. That changed in October 2010 when the department published a general order that stated that employees were not obligated to carry, access or respond to their devices while off-duty, and that they wouldn’t be compensated for using it off-duty unless the employee is officially on a callback assignment — meaning they are called back to work — or directed by their superior to immediately perform a substantial task with overtime authorization. An updated policy in 2013 forbade employees from using their devices while off-duty unless a supervisor directed them to perform work immediately and authorized overtime pay for it.

All Police Department members with the rank of lieutenant and below are hourly employees who are not exempt from overtime pay….

The city’s attorneys, from the law firm Laner Muchin, noted that some calls and emails being used as examples took just a few minutes and that some could have waited until their next shift, and that supervisors wouldn’t always know that the person they were calling was off-duty.

Some witnesses testified that they didn’t consider putting in for overtime because they thought they would be punished.

Others, including a 28-year veteran now in charge of the narcotics division, according to the Tribune, said there was an expectation to check messages after hours but that it was the officers’ choice not to try to cash in the overtime pay. Some witnesses said they were never discouraged from doing so and never complained to their superiors about the work. Even without the disputed pay, Chicago spent about $100 million in 2013 on police overtime.