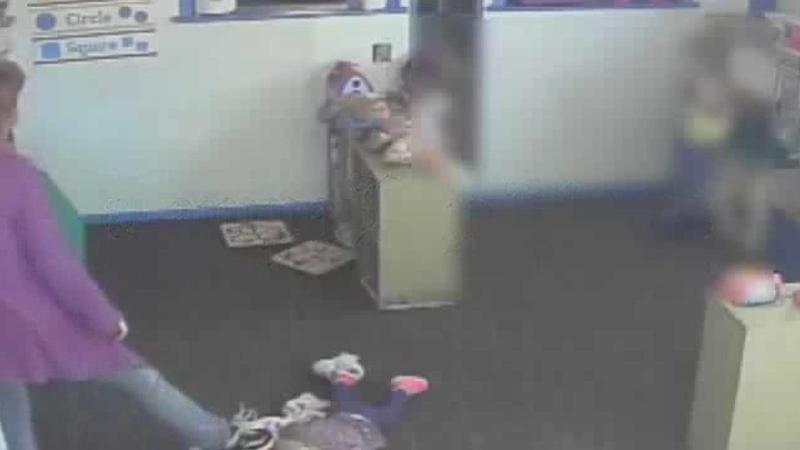 Video taken at Kids Stop-N-Play Daycare, 5339 Mile Stretch Road, shows the child sleeping on the floor while other children played nearby. The video shows Linda Klemm, 49, kick the top of the child’s head and drag the bottom of her foot across the left side of the child’s face, making her cry.

The girl fell back asleep, but 10 minutes later, Klemm kicked the girl in the buttocks and yanked her to a sitting position, the video showed.

Although the girl did not suffer serious injuries, Sheriff Chris Nocco characterized the crime as “horrific” Tuesday, adding that the video astonished hardened investigators.

“She said she was sorry, but never admitted to kicking her in the head,” Wood said. “I even stopped the video and rewound it several times.”

Wood said the girl’s family also was “horrified” by the footage.

Kids Stop-N-Play owner Rhonda Swetland said a worker called her Saturday after Faggione returned to the day care to complain. Swetland said she was met by two deputies at the business. Klemm was arrested after Swetland and the deputies watched the video, she said.

Swetland, who has owned the day care since 1992, said she fired Klemm immediately. Klemm said she was merely pushing a blanket closer to the girl, according to Swetland.

Swetland said she was devastated when she saw the video. “I have worked 22 years in this business and I would never have expected anything like this,” she said, adding that the day care has 16 cameras to monitor activity.

Swetland said she is cooperating with authorities in the investigation.

Swetland said Klemm, who has worked at the day care for four years, has four children. “I don’t get it,” Swetland said.

Nocco urged parents to immediately call the sheriff’s office or Florida Department of Children and Families if they have suspicions about their child’s treatment at a day care center, school or other place where they are cared for.

“Some hardened law enforcement officers looked at this and just said, ‘What was (Klemm) thinking?’ ” Nocco said. “The victim is 15 months old with no way to defend herself. This won’t be tolerated anywhere.”

A Long Island, N.Y., native living in Tarpon Springs, Klemm was released from the Land O’ Lakes Jail on Sunday after posting $5,000 bail, records show. She had no previous criminal record in Pasco, jail records show.

How We Can Help
If you, a friend or a family member find themselves in a situation such as this, please call the Law Office of Scott A. Ferris, P.A. at 305 670-3330 right away. Scott A. Ferris, Esq. is a licensed family law attorney who has been practicing law since 1987. He is available whenever you need him to pursue your rights. Please learn about our firm at www.FerrisLawFirm.com.